The idea for LEAN was born at the beginning of the new millennium when networks were being created throughout wide areas of the industry and the 'pioneering bonus' for inter-company cooperation was dwindling. At the time, a number of OEM clients in the merchandising sector were turning their backs on Freek, especially the major ones. Not only had they continued to develop, they had also built up their own global sourcing competence and no longer saw any reason to meet their needs through a distributor. At the same time, the economic crisis triggered by 9/11 and the resulting upward pressure on costs increased companies' willingness to transfer to the manufacturing companies.

Apart from these market influences Freek was also being forced toward consolidation and reorientation by a number of homemade problems. Triple sales volumes in a period of just 5 years together with the exponentiation of customers, orders and products had pushed the company over the threshold from being a small company to becoming a middle-sized one, and created the pressing need to reorganise in the process. As a result of the growing organisational demands of the market, the EUCOPET cooperation, and the newly added trading business the number of employees in the indirect functional area alone had doubled to 15 in the 4 years prior to the turn of the century and was one of the reasons for our decision to build an extension to the admin department. This explains why, in 2002, we not only had our highest sales volume, but also the highest number of complaints ever in the company's history: we were more than ready to welcome a period of consolidation. 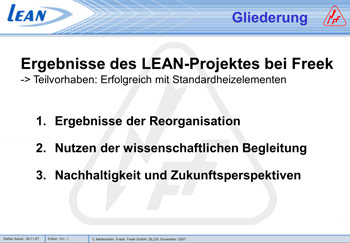 The analysis of the potential factors of production revealed that in the wake of the cooperation and innovation strategy EUCOPET – against all expectations – the traditional simple standard heating element had withstood the competition from low-wage countries. Despite a continually decreasing relative share of turnover, which at the time was around 25%, it had still been possible to maintain the absolute figures at the 1995 level – when 100% of sales were made with standard heating elements.

A closer look at this phenomenon revealed that, on the one side, Freek had been able to exploit savings potentials and acquiesce to the pricing pressure of the markets. On the other, we had still been able to bind customers despite higher prices. A more detailed analysis showed that the most loyal customers for simple standard heating elements were, for the most part, those we had been able to help in difficult times, for whom we had fulfilled special requests, or whose business demanded short reaction times and first-rate service. We had even been able to generate new business. Our chief most successful products were modified standard heating elements, e.g. for niche applications, small series or high-priced household appliances.