Switch over to turbo mode following K show. The 2010 sales target was again exceeded by a wide margin, despite its directors having made two further upward adjustments to the defined goals and objectives. The effects of the K show were so unpredictably strong that, in the end, sales figures even exceeded the record achieved in 2008.

This can, to a certain extent, be credited to the general economic recovery. But the fact that the result is so satisfactory is first and foremost a compliment to the team at Freek that had a good feeling for the right projects during the crisis, and was able to bring them to fruition at the right time. Projects included a number of promising product developments and process improvements, which could not have done better than to be presented at the K show.

However, it is not only the rapid growth in recent business that is prompting Freek to gear up for a new long lasting growth cycle. Even more decisive is the consistent ongoing development of the specially developed LEAN business model in respect of the acquisition of both new and upmarket customers, especially for niche and high-tech applications. It is precisely this goal to which Freek has been committed since May 2008 with its cooperative research project Low2High and the topic "Product innovation at the customer interface with high-tech producers". 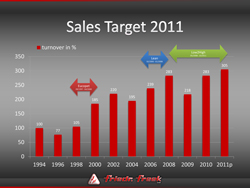