The transferral of this part of the production to Menden in Germany's Sauerland region should make it easier to meet, in particular, the demand profile of the German market. Whereas customers have long been able to see for themselves that with high-performance Euroheat-style cartridge heaters they are buying top quality, previous attempts to expand the market share accordingly were thwarted by inadequate delivery times and services.

For the past 15 years Freek has been actively involved in research projects in the fields of cooperation, innovation and production research. By doing so Freek is able to fulfil the high specific requirements of the German market, especially with regard to product individuality and innovation, as well as in respect of short reaction and delivery times. As a result, cooperation networks, business models and process chains were created, corporate strategies were refined and, last but not least, competitive competences were developed – all together with partners from the science departments of the Universities of Dortmund and Bochum, as well as with the Fraunhofer ISI in Karlsruhe.

The same scientific partners will also accompany the recently undertaken step in the current cooperative research project Low2High. And the step is only logical, as it will combine the first-rate system competence of Freek with the equally as excellent process and technology competences of Euroheat, thereby improving the competitive position of Euroheat-style cartridge heaters considerably. 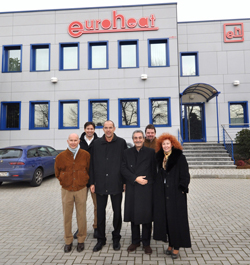